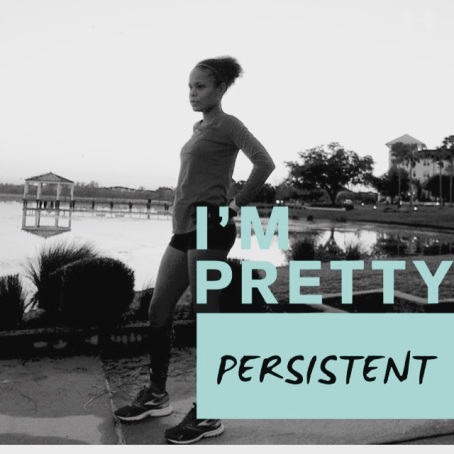 “The pain of training is nothing compared to the pain of not reaching your potential.”

It appears that my push for a PR in Swamp House 5K and a surprisingly second place age group award came with a price. It was not a wonder that my calves took a beating on that race and that my legs were tired after logging 90.1 miles for the month of February. However, I was confident and feeling strong that with a few days of rest from running and some general rest, I’d be able to pull it off and gear up in the upcoming weeks for Tomoka Half marathon. After some rest, miles and hours of strength training later, my left adductor told me otherwise.

It was such a beautiful Saturday morning for a short-long run on the West Orange Trail with the fam. Kurt was getting his exercise on wheels with his rollerblades, R2-D2 was enjoying his 10:10 interval – 10 run: 10 ride on his stroller (yes, he has a baby stroller), and I was happy as I could be running an easy 7-miler on my own feet until I felt a sharp pain traveling from my the bottom of my leg all the way to my hamstring reaching the groin area. What in the world was that? I told Kurt about it, but we didn’t put much thought because pain is part of running. 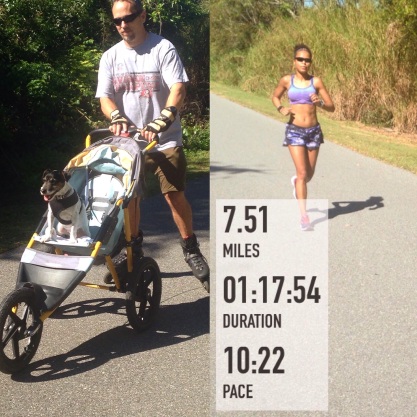 My pace slowed down during mile 5 and 6, but I was able to pick it up back at mile 7 but I slowed down for the last .50 and used as my cool down. I ended the run with a brief walk and a quick stretched sesh. The stretch was very uncomfortable and every step was getting stiffed by the second. Getting out of the car after seating for a 10-minute drive home was horrifying. I haven’t felt pain and stiffness like that in a very long time – not even when I finished a half marathon race or my 20-miler last year training for Tomoka marathon. It was super sore after Tomoka, but again, nothing like after this 7-miler run. Having realized the state of pain, I went on for a real stretch and foam rolling sesh before eating. 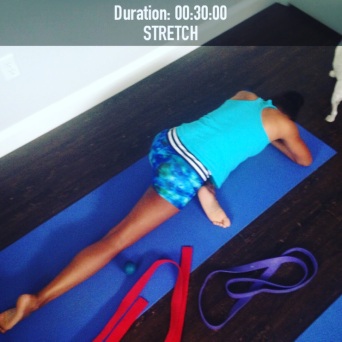 I sat down for breakfast and I felt like I should not had done so. The pain again was sharp with every body movement I took. At that point, I decided that I really needed to take an ibuprofen and go to the pool for some cool water therapy since the water was a cold enough (68 degrees) as a short-cut to an ice bath. I spent about one-hour standing/walking in the pool in hopes that the discomfort would diminish with every passing hour. I suppose I can only hope but not ignore the fact that DOMS (delayed onset muscle soreness) was yet to come, right?!

I hardly ever take naps. First of all, I can’t afford naps since I work an eight-hour shift Monday-Friday. Second, I avoid creation such habit. And third, I use naps as a reference point to know when my body is really tired and in need of rest rather than being lazy for a nap. This Saturday, unfortunately, was a day that my body was telling me it was super tired and a nap was needed. After taking two more ibuprofen, I napped for almost two hours, but the soreness was still present with every movement I made and step I took.

The following Monday, I had a 3-miler easy run on the schedule. I did run, but it was brutal. My pace and strides were off as the discomfort was still present. At that point, I decided to see Dr. Brad at Orlando Sports Chiropractor. Dr. Brad diagnosed the injury to be a strained adductor muscle, some heat therapy, lots of stretch and rest. Going through gastron technique performed in the left inner thigh was ridiculous painful. I’ll take calf soreness if I had to choose. 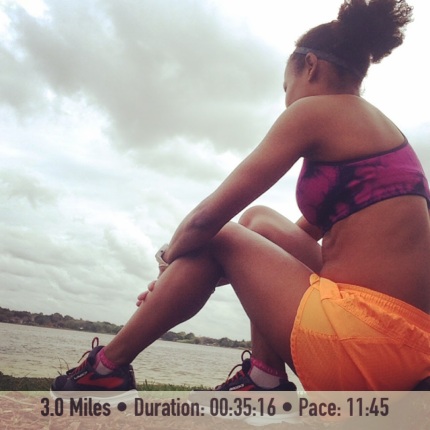 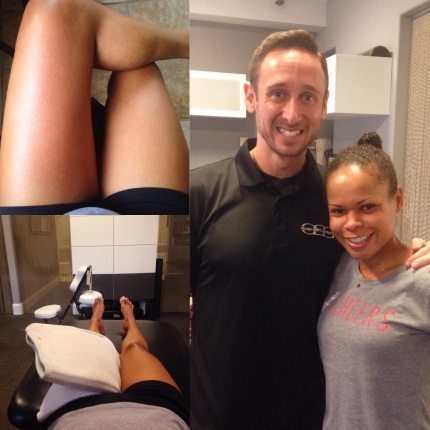 Physical therapy, rest, spinning, heat and cold therapies, and strength training workouts was the priority at this point. After Monday’s chiropractor visit, I started to feel better. Kurt (he’s a licensed massage therapist specializing in sports massage and AIS) worked on me on Tuesday for a 25-minute session of AIS (Active Isolated Stretching technique) and it has helped a great deal. By Wednesday, I was hopeful that it was healed. I didn’t feel any major discomfort when moving, I was more stable in doing my Bosu ball stability workouts; therefore, I was ready to give a test-run on Thursday morning and find out for sure if racing Tomoka half was even possible.

Comes Thursday morning and I felt a little stiffness on the injured leg. I did drills warm up as usual but as soon as I started to run, the discomfort let me know that it hadn’t gone away just yet. I estimated to be foreseeable to feel some discomfort. Because the discomfort was a lot lesser than on Monday’s run, I kept going. At some point at mile 2, I had to pause and I wished I had not. The pain wanted to settle in, so I restarted the run to complete the scheduled 3-mile run. I was able to pick up pace to finish the run with negative splits at 11:32, 10:35 and 9:59. 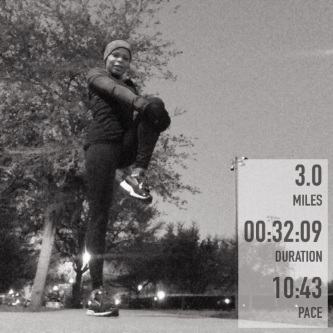 It was hard even to pose for a picture! Ughh! Ouch!

I haven’t felt anything worse than an angry adductor after a run until now, and I thought that Saturday’s run was bad! Oh my goodness… the pain was excruciating, my left leg was stiffed as a wood board; it hurt to bend, it hurt to stretch, it hurt to raise my leg, it hurt to put pressure on, and it hurt to walk. Some slow movements of stretch was the only thing that it appeared to alleviate the pain I was feeling, but still, it was hurting as hell. I got scared at that point. Getting in the car to go the gym for a more decent stretch and shower was becoming a hard and scary task. I was barely walking and it felt like I needed crutch. I was thinking, what am I doing to myself? But I needed this test-run to see where I was in this injury. With only nine days shy from race day, I was certain that I could go ahead pull out of the race and cancel all travel plans.

Since the mind-opening and body-painful experience I had in Lighthouse Loop half marathon in October 2016, I promised myself that I would never put myself in such situation again. I’ve learned to respect my body and mind more after this experience. No race (unless it is the Boston marathon) is worth pushing through pain when clearly I am not 100% healthy or confident. Logistically, there was no reasonable explanation or indication that I would have a comfortable and fun race; most importantly, there was not a possible outcome for a sub-2 result. Before Lighthouse Loop, I didn’t realize how mentally draining a race can be. There’s a fine line of pushing mental fitness boundaries for a goal and pushing it out of greed or ignorance. I will pick my battles wisely from now on.

Although it is frustrating to be on the shelf for a few days, there’s a part of recovery or rehab period that it is gratifying. We have to at least try to find the good in a not so favorable situation. It is part of the growth of being a better person and a better athlete. And in this phase, it is where practice of mental toughness and fitness plays a great deal on whether we stay on the path to our goals or take the short cut path which is to give up, because the reality is, there is no short cut. Either we do the work or we don’t. Either you learn to adapt or not. 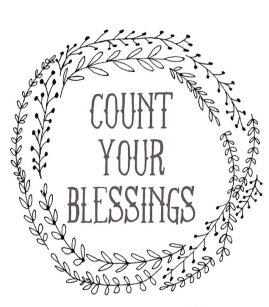 The first twelve days of rehab/recovery consisted of a straight-forward routine of physical therapy, strength training, cold and hot therapy, and a mental break as well on the days that I felt that I needed to give some rest while practicing not feeling guilty for not doing a workout.

Easy 3-miler run – It was a no-go for Tomoka half. 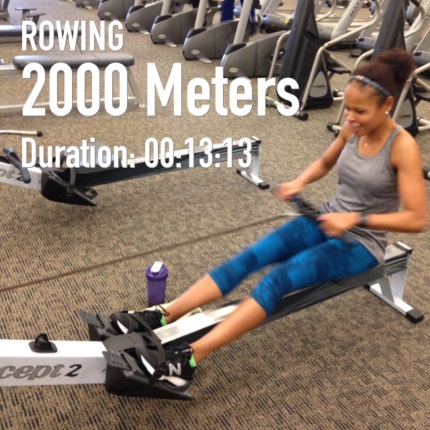 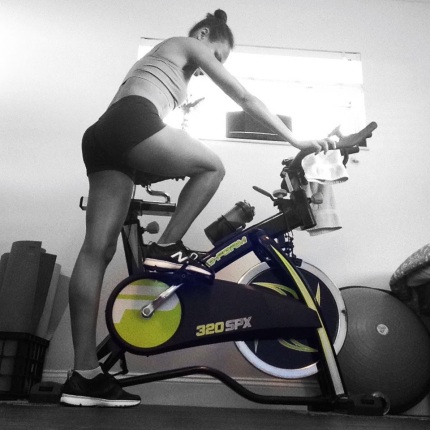 On day-10 it was time for me to do a test-run and see how far I have progressed. I was confident and eager to go out for run. I spent a little more extra time doing warm up drill, in part because I knew I had to focus more on that, and in part because I was getting a little nervous about it. As soon as I hit the start bottom, the feeling of being able to run again was exhilarating. I felt in peace and so grateful. I felt like a bird being able to freely fly again.

I was very conservative on my comeback test-run and made sure to go easy. Nothing really bothered me during the run and it was a solid 2-miler until the end. My heart rate averaged at 163 bpm. It’s in the aerobic capacity and a little higher than my recommended easy pace of under 155-150, but I’m excited to know spinning sessions and rowing sessions has helped keep my cardio going. After the run, my leg was a little thigh indicating me that stretch was a MUST and that more PT work was most certainly needed. The routine will remain until I feel 100% healed, and even then, I’ll be putting a lot more focus on hip flexor and legs strength training.

It is a bummer to miss this year’s Tomoka half marathon. It has become a tradition to run a Tomoka event for the past two years, and I was so eager to see how my performance would be since starting to work with Coach Victoria. However, I have nothing but gratitude for being where I am today with my progress in running. I’ve reached goals that I never thought possible. I know that despite this set back, my body is much stronger than it was a year ago. I am counting my blessings today and every day and I will continue to become an even stronger runner than I was yesterday. Giving up is not an option, not now.

I wish all runners a successful and fun race!

“Do what you have to do until you can do what you want to do.”